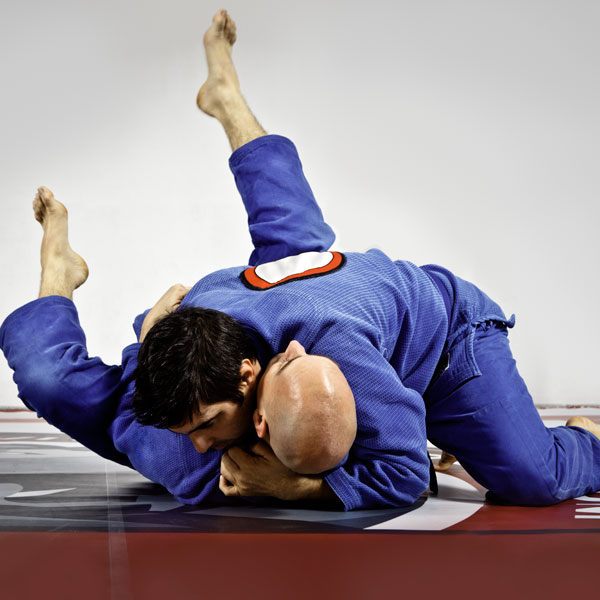 Chris Diaz stood in the center of the mat in his hometown of Philadelphia, with a referee's hand clasped around his wrist. In a matter of seconds, Diaz's arm was hoisted into the air in victory. He had just won a Brazilian Jiu-Jitsu match.

Now, for a black belt in this martial art, that may not sound like much. And for a former hospital corpsman in the U.S. Navy working as a medical specialist for Marines who served in Afghanistan, it may not sound as intense or important in life's grander view.

So let's rewind to earlier in 2018 for some context. About six months earlier, Chris Diaz underwent surgery by Dr. Alexander Poor at the Vincera Institute in Philadelphia for athletic pubalgia. More commonly referred to a "sports hernia," this injury affects soft tissue in the groin area and most often occurs in sports that require sudden changes in direction or twisting motion. Well, Brazilian Jiu-Jitsu certainly delivers plenty of both. The soccer field, where Diaz recalled injuring himself, also lends itself to plenty of changes in direction.

"By the end of the year, I competed in my first Fight to Win, a submission-only jiu-jitsu company, and won my match," Chris said. "We're talking less than six months from operating, coming back to actually compete at the black belt level and winning was testament to the work that they did."

Chris, 37, said the injury, which affected both sides of his groin area, occurred suddenly while playing soccer.

"I made a hard cut, took a stab at it and tried to deflect the ball to get a goal," Chris said. "Something definitely didn't feel right."

Like many recreational athletes competing for the fun of it, Chris figured the pain would go away. It didn't. Still, he let it linger. He still could train at his jiu-jitsu academy. He still could play soccer. But after six to eight months, when the pain became unbearable, Chris knew it was time to act.

"There was just pain," said Chris, a performance coach nearing his Ph.D. in clinical psychology. "And pain is kind of involved in a lot of things I do anyways, so the threshold wasn't enough for me to do something. When I realized it wasn't tenable anymore because it was impacting my ability to perform at what I do in life, then there wasn't a decision anymore."

Chris had surgery to repair his bilateral athletic pubalgia. The very next day, he returned to his jiu-jitsu academy and stepped onto the mats. Not to compete or train. Rather, this was the mental boost he needed to begin his healing process.

As physical therapy progressed and Chris received clearance to perform more athletic activities, he eventually returned to the mats to train. He attended a Saturday morning open mat session, where anyone in the academy is able to go.

"I did something I thought I could do and I couldn't," Chris said. "I literally felt a pop in the groin and I had to double over. I was in tears and I was thinking that I just re-injured myself."

Chris immediately sent a text message to Dr. Poor, to inform him of the setback ahead of their consultation on Monday. Only, here's the thing: it wasn't a setback, Chris found out.

Dr. Poor responded to Chris that same day. "Don't worry about it, it's totally normal," Chris recalled Dr. Poor texting him, "I was like, ‘No, Doc, you don't understand. This isn't normal. I felt my groin pop.'"

Dr. Poor explained to Chris, on a Saturday, mind you, that this was part of the healing process.

"I'm not an elite professional athlete," Chris said. "I've seen him respond like that to many patients. It's literally on listed right on all your materials, this is my cell phone number you contact me if you have any questions. That's part of the service you're getting at Vincera."

Chris certainly isn't alone in receiving such treatment and attention from the Vincera Institute.

"When I see athletes and I see that this is the injury they have, I just literally count down the days before I read about the fact that they came to Philadelphia to get this procedure done," Chris said. "Because this is the place in the world where, I don't care if you're playing soccer in the Premier League, or you're in the NFL, this is where you're coming to get this work done."

Chris believes he became a better athlete since this injury. It helped him learn how to recover better, how to be even stronger mentally and bounce back from a setback, all keys in his occupation as a performance coach who works with athletes, executives, military personnel and people in other walks of life.

"When I get up in front of people, they don't want to see somebody who isn't able to bring that energy that I have," Chris said. "They're not paying me because I've read some books. they recognize that I'm somebody who's living life and getting at it, so I can't afford to not do anything other than bring my best self forward."